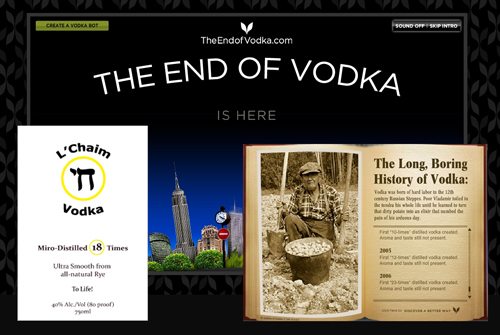 L’Chaim Vodka is distilled no less than 18 times. In an excellent website (www.theendofvodka.com), VeeV Acai Liqueur pokes fun at the vodkas distilled 3, 5, 23, 570 times. The site is funny, pretty, and makes a good point. It tends to suggest that after the first couple of distillations, and after pushing the spirit past 190 proof, it’s a fairly pointless exercise to distill it more.
Virtuoso Distillers, of Mishawaka, Indiana, is undaunted. In box 19 of the L’Chaim approval, Steven Ross patiently explains that the vodka is distilled 18 times. TTB frequently asks for such a confirmation, when the label sets forth the number of distillations or filtrations. This is odd because the label already claims it under penalty of perjury, the certification doesn’t seem to make it any more likely to be true, and it would seem to be a minor point in any event (for the reasons suggested by VeeV).
Mr. Ross has a lot more going on, on this label. He further explains that L’Chaim (or, “To Life”) is similar to “cheers,” carefully avoiding any suggestion that it’s about health. This is not a small matter because, prior to this approval, the term was rarely used in a prominent way on US alcohol beverage labels. Mr. Ross explains that the letters that spell L’Chaim also “add up to the number 18.”