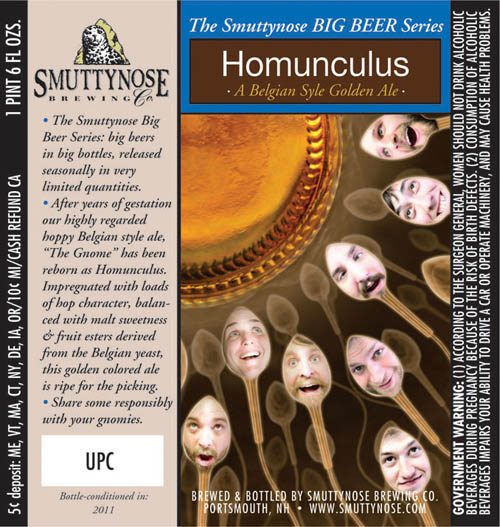 A few days ago I got a great email from Smuttynose. There is a lot to learn from it. Peter Egelston (CEO of this New Hampshire brewery) explained about his recent label approval for — Homunculus Ale:

In 2007, as part of our limited-release, draft-only Short Batch Series, we felt comfortable calling this beer “the Gnome,” a blatant reference to Belgium’s Brasserie d’Achouffe. (Dave, our Director of Brewing Operations explains it here.) When we discussed graduating the Gnome to wider distribution in bottles as part of our Big Beer Series, we felt it was important to be respectful of Brasserie d’Achouffe’s trademark, so we cast about for another name.

As you know, naming a beer, like naming a rock band, is harder than it appears, but everyone wants to take a whack at it. If I had a nickel for everyone who’s approached me at parties with “a great idea for a beer” over the last twenty-plus years, when all they’ve got is a name they think is clever (usually involving a pun), but really isn’t, I could probably buy a fancy dinner with a pricey bottle of wine to boot.

I suggested Homunculus, partly because it means “little man,” making it a distant synonym for “gnome,” but mostly because it’s an absurd-sounding word, the mere utterance of which is fun to do (one of my primary criteria for a successful product name). No one had the energy to argue with me, so Homunculus it was.

When we started to look at images to illustrate this name, we discovered another use for the term homunculus. In the early days of microscopy during the 17th century, when cells could be seen for the first time, the theory of “preformation” was posited. According to this theory, contained within each human spermatazoon was a perfectly formed, albeit tiny, human form — a homunculus. Having discovered this obscure fact, my partner Joanne Francis, who has designed all of our labels, ran with it, modifying an electron microscope image, turning our brewers into sperm cells, and the egg into a beer bottle.

Will anyone buy a beer called Homunculus? Who knows? People asked the same about Smuttynose years ago, and we’re still selling beer today.

If you pay close attention, you can learn a lot about life, death, art, science, religion, history and philosophy from the humblest beer label. And you can finally learn about the little man.
What’s the story with your label?